Jude’s story: “I was drowning in interest repayments.” 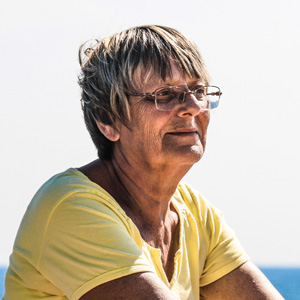 Jude and her husband raised their family of four children in Wellington and owned their own home. When their youngest child was three years, Jude went back to work and worked until she reached retirement age.

“We lived like so many people do – spending all that we earned. It was never a struggle, but we didn’t put anything away either. We had no insurances. When I look back, we didn’t do as well as I thought.”

Later in their married life, Jude’s husband purchased a business in Palmerston North where they lived for 14 years. “We purchased the business, sold the house and moved to Palmy where we rented. While things went well initially, the business didn’t do well and it was eventually folded. My husband didn’t want to declare bankruptcy, so for many years we paid back our creditors and weren’t able to get back to the financial position we’d been in.”

For Jude, there was a sequence of life events that led to her being in financial hardship. “When we reached retirement age, we moved to Foxton beach and rented a house there, which was wonderful. Then my husband lost most of his memory after a near-drowning incident and this was quickly followed by cancer of the oesophagus. While I was caring for him, I paid less attention to what I was spending and things started to get out of control,” says Jude. “Caring for my husband in his final months was all I thought about and I spent what I needed without giving it any thought.”

It was only after Jude’s husband passed away that she started to realise the extent of their debt. Combined with her credit card debt and a reduced fixed income, this debt suddenly put her in severe financial hardship. “When you’re working, paying $50 towards something is nothing, but when you’re on a fixed income, even $10 is a lot. I was drowning in interest repayments and couldn’t see any way ahead.”

“One night, I realised I needed to get help and I went to the local budget advisor. I was so nervous and embarrassed at my age to have to go there. After the first visit I thought, ‘actually, there are a heck of a lot of people like me here’.”

“The budget advisor was amazing. She helped me in so many practical ways including suggesting getting a GetControl Debt Relief loan from Ngā Tāngata Microfinance,” says Jude. “The loan made such a difference. Even though it has taken me two and a half years to pay it off, not paying any interest or fees has made a huge difference. To see the balance go down rather than stay the same because you’re paying such high interest is incredible.”

Jude has nearly paid off her loan and has decided that she’s going to divert the repayments she’s been making to a savings account once she has cleared the debt.

“I’ve learnt so much and I’m determined now to start saving. The loan from Ngā Tāngata has saved my life. I can’t express how to thank them enough.”